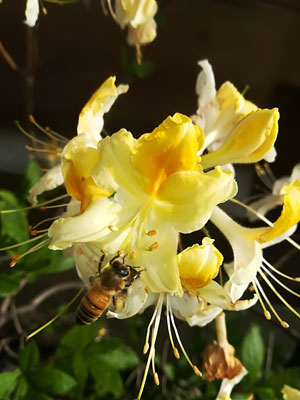 Frequently Asked Questions for Beginners (FAQs)
For those thinking of starting, or have just started beekeeping

A: A nuc is approximately 10 000 bees that come with four frames of drawn wax foundation (two to three frames capped brood, open larva in all stages, fresh eggs and our own raised de Groots queen).

Q: When can I place an order for my Nucleus Colony and when will my Nuc be ready?

A: The earlier, the better for ordering! You can start ordering your nucs as early as December. You can place orders from December through May. Order early! Our nucs are ready last weekend of May to last weekend of June.

Q: How are my bees packaged and how do I transport them?

A: Our nucs are packaged in corrugated professional nuc boxes that have adequate ventilation and the bees cannot get out. All nucs are to be picked up at our bee farm on pick up dates. Your nuc can be placed in the back of an SUV or trunk of a car at your discretion

Q: What type of queens do you sell, and are they guaranteed?

A: We sell Italian queens with genetics hardy to zone three, and guarantee our queens to arrive healthy and egg producing. Should you find that your queen is not producing eggs within 10 calendar days of installation, simply notify us and we will give you a replacement queen.

Q: Are the nuc queens this years or last years queens?

Q: When and how do I install my new bees?

A: Nucleus colonies are to be installed within one day of purchase into your main hive bodies. Smoke the bees gently through the ventilation wire on top of your nuc box. Take the four middle frames out of your main hive body. Put your four frame nuc into the middle of your hive body where you just took out your four frames. Do not search for the queen, I guarantee she is in there. Feed your bees a light solution of sugar syrup (two parts sugar: one part water) for next three weeks. Add equipment as needed according to how your choice method of beekeeping is.

A: Since I started rearing queens in 2011 I’ve been handling many of them a year. I’ve never been stung by a queen.

Jay Smith, a beekeeper who reared thousands of queens a year for decades, said he was only stung by one once and he said she stung him right where he had squished a queen earlier and he though she thought it was a queen.

Can they? Yes. Will they? Extremely doubtful. The few people who I’ve met who say they’ve been stung by a queen say it didn’t hurt as bad as a worker.

Q: Dead bees in front of the hive?

A: With the queen laying 1,000 to 3,000 eggs a day and bees living about six weeks, there are always some dead bees in front of the hive. Often you don’t see them because they are in the weeds or grass. A lot of dead bees (piles of them) might be cause for concern because it may be a sign of pesticide poisoning or some other problem. But some are normal.

Q: How far do foragers fly?

A: Up to 10 km in times of desperation to locate nectar, usually it’s around 5 km.

Q: How far do drones fly to mate?

A: I don’t think anyone really knows. They fly to DCAs (drone congregation areas) and there are certain topographical clues they look for as well as pheromone trails in order to find one. DCAs are usually at a place where a tree row meets a tree row. The research seems to show that drones fly to the nearest DCA. The location, being dependent on the terrain and the amount of other hives nearby, the distance is hard to predict.

Q: How many hives can I have on one acre?

A: The problem with this question is it assumes the bees will stay on the one acre. They will forage the surrounding 8,000 acres (32 square km).

Q: How many hives can I have in one place?

A: This is a difficult question to have a distinct answer to. Up to 20 hives is the norm for our rural geographic location.

Q: How many hives should a beginning beekeeper start with?

A: The standard answer is two. Less than two and you don’t have resources to resolve typical beekeeping issues like queenlessness, suspected queenlessness, laying workers etc. More than four is a bit much for a beginning beekeeper to keep up with.

Q: How much honey will my hive make?

A: Some years 200 pounds (90 kg). Some years 40 pounds or less. Most likely, most years it will be somewhere in between. It is impossible to say.

Q: Where should I put my hive?

A: The problem is there isn’t a simple answer. But this is what works for us:

Safety. It’s essential to have the hive where they are not a threat to animals who are chained or penned up and can’t flee if they are attacked, or where they are likely to be a threat to passers-by who don’t know there are hives there. If the hive is going to be close to a path that people walk you need to have a fence or something to get the bees up over the people’s heads. Also face the hive away from the path or any area that people will be using a lot. For the safety of the bees they should be where cattle won’t rub on them and knock them over, horses won’t knock them over and bears can’t get to them.

Convenient access. It’s essential to have the hive where the beekeeper can drive right up to it. Carrying full supers that could weigh from 90 pounds (deep) down to 48 pounds (eight frame medium) any distance is too much work. The same for bringing beekeeping equipment to the hives. Also you will learn a lot more about bees with a hive in your backyard than a hive 20 miles away at a friend’s house and the bees will receive much better care.

Good forage. If you have a lot of options, then go for a place with lots of forage. Red maples and poplars and fields of wildflowers etc. can make the difference between early pollen and early brood rearing and bee survival. But keep in mind the bees will not only be foraging the space you own, they will be foraging the 8,000 acres (32 square km) around the hives.

Not in your way. I think it’s important the hive does not interfere with anyone’s life much. In other words, don’t put it right next to a well used path where, in a dearth and in a bad mood, the bees may harass or sting someone or anywhere else where you are likely to wish they weren’t there.

Full sun. I find hives in full sun have fewer problems with diseases and pests and make more honey.

Out of the wind. It’s nice to have them where the cold winter wind doesn’t blow on them so hard and the wind is less likely to blow them over or blow off the lids. This isn’t my number one requirement, but if a place is available that has a windbreak it’s nice.

Not in a low-lying area. I don’t care if they are somewhere in the middle, but I’d rather not have them where the dew and the fog and the cold settle and I really don’t want them where I have to move them if there’s a threat of a flood.

If you live in a very hot sandy climate, mid afternoon shade might be a nice to have, but I wouldn’t lose sleep over it.

In the end, bees are very adaptable. They really don’t care, so make sure it’s convenient for you, and if it’s not too hard to provide, try to meet some of the other criteria, if not do your best.

Q: How do I keep queens for a few days?

A: If you need to keep our deGroot queens that come in cages with attendants and candy, for a few days, you can minimize the stress by keeping them in a cool (like 70o F or 21o C) dark (like a closet) quiet (like a closet or the basement) place and give them a drop of water everyday so they can digest the candy and they will usually keep well. Give them a drop as soon as you receive them and one a day after that. If the candy looks like it will run out, you might have to give them a drop of honey and a drop of water every day. I recommend installing your Queens as soon as you can.

Q: What kind of foundation do I use?

A: The thing the bees like the most, is no foundation. Foundationless frames are the best accepted, and the most natural. They have many advantages from the Varroa control of smaller cells, to being able to cut out queen cells from a comb without worrying about hitting a wire or having plastic in the middle of the comb stop you.

The thing the bees like next, is wax foundation. They can rework it to what they want. But the closer it is to what they want the better it will be accepted. Plastic is also suitable for bees however in my experience they will work on it at a much slower rate.

A: All of them. Read every beekeeping book you can get your hands on. But my favorites are the old ABC XYZ of Bee Culture, Langstroth’s Hive and The Honey Bee.

Q: Where should I buy my bees?

A: There has been much speculation by beekeepers for many centuries on this. Italians were pretty much what everyone wanted. Now there are just as many who want Carniolans or Caucasians or Buckfasts or Russians. I see more variation from hive to hive than race to race. We raise an Italian dominant honeybee with Carniolan minority traits. I’d say the best breeds of bees are the ones that are surviving around you. That’s what I’m raising.

A: With a death over winter, a post-mortem check includes:

If they are in contact with stores, are there thousands of dead Varroa on the bottom board? If so, I think it’s safe to say the primary cause was Varroa.

Are there a lot of little clusters of bees in the hive instead of one large cluster? If so I would suspect Tracheal mites.

Are the bees wet and moldy? If so I would suspect condensation got them wet and wet bees seldom survive.

It is a commonly held belief that bees dead headfirst in the cells means they starved. All dead hives over winter will have many bees with their heads in cells. That’s how they cluster tightly for warmth. I would read more into whether or not they are on contact with stores.

With a death during the active season, I’d look for piles of dead bees and if there are signs of robbing. Robbing can lead to piles of dead bees, but there are other symptoms like ragged comb and frantic bees. Pesticides usually have crawling dying bees and piles of them dead. A dwindling hive, you should probably check the brood on to make sure you don’t have a brood disease.